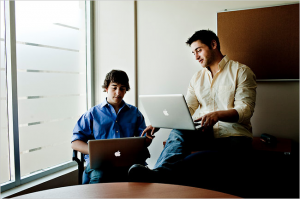 Capital Entrepreneurs member company Entrustet was featured in the New York Times magazine’s online edition today in an article called Cyberspace when you’re Dead.Â  The print edition will run on Sunday.Â  The article follows the threads of digital death and digital identity and talks about Entrustet’s digital death industry.Â  From the link:

The founders of Entrustet are surprisingly young. Jesse Davis , who is 23, was still a student at the University of Wisconsin when he wrote the original business plan in 2008. He came up with the idea after reading what has become one of the best-known stories on the complexities of digital assets and one of the few that has found its way into the courts. Justin Ellsworth, a Marine killed in Iraq in 2004, did not leave behind the password to his Yahoo e-mail account, and when the company refused to give his parents access to it, they sued. Eventually, under orders from a probate judge, Yahoo gave them a CD it said contained Ellsworthâ€™s e-mail. Ellsworthâ€™s story convinced Davis and his business partner, Nathan Lustig, 25, that there was a market for â€œdigital estate planningâ€ services. In the case of Entrustet, this means an automated system for storing passwords and instructions for all your digital assets.

Such businesses rest on a simple idea: Web, mobile and social-media use keeps exploding; everyone still dies. Meanwhile, much of the archiving of basic family life is becoming digital. It has become routine to have an online â€œpresenceâ€ even as an infant, by way of a picture posted on a parentâ€™s social-networking profile. Lustig pointed me to a recent corporate study that identified â€œchief memory officerâ€ as a kind of unofficial role taken on by someone (often mom) in many families â€” the person who is paying attention to the idea that there may be no physical scrapbook or set of journals to hand down to future generations and that bits-and-bytes memory objects need to be preserved somehow. Trendwatching.com has predicted a â€œburgeoning marketâ€ for products and services that protect the digital content that is â€œthe nucleus of oneâ€™s personal brand.â€

Entrustet was also featured on an NPR talkshow interview that can be listened to here.