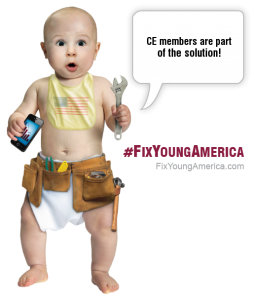 Capital Entrepreneurs has recently partnered with the Young Entrepreneur Council (YEC) to promote their #FixYoungAmerica campaign to address a single, nagging question in the U.S.: How do we overcome the twin epidemics of youth unemployment and underemployment?

#FixYoungAmerica is also asking supporters to help fund the movement via a crowdfunding effort on IndieGoGo. The campaign doesn’t want to try to solve youth employment by throwing money at the problem. Instead, it’s looking for “actual solutions” and to serve as the “beginning of a conversation” about the economic conditions facing American youth â€” and how to fix them.

They also partnered with the Young Invincibles who are kicking off a nationwide bus tour to promote #FixYoungAmerica and their State of Young America report. The Young Invincibles bus tour kicks off from Madison on Wednesday, March 14th at 12:30pm from the Memorial Union on the UW campus.